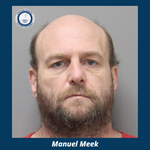 Manuel Meek, 49, and the victim had an on-again, off-again relationship for many years; at one point marrying in the late 1990s. Throughout their relationship, Meek was abusive, being convicted of Domestic Abuse Battery on two previous occasions.

George continued, “Those in abusive relationships often feel stuck and need help getting out. This conviction shows that those who commit domestic violence can, and will, be held accountable. Today, the power was taken from her abuser.”

The jury deliberated for approximately two hours before returning a unanimous guilty verdict.

The Honorable F. Hugh Larose presided over the trial, and ordered that Meek be remanded into state custody pending his formal sentencing date.

Manual Meek faces a possible sentence of up to 53 years at the Louisiana Department of Corrections.