Cut-Off Man Convicted of Raping Teenager While Mother Was Restrained 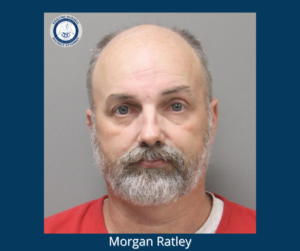 In July of 2019, Ratley restrained the victim’s mother to a chair, and then proceeded to rape the teenage victim in a separate room. After two days, the victim and her mother were able to escape while Ratley slept, and they reported what happened to the Lafourche Parish Sheriff’s Office. Ratley was subsequently taken into custody.

The victim testified during the trial, describing the sexual abuse and fear she lived with at the hands of Morgan Ratley.

“I tried to fight against him the best I could, but he threatened to hurt my mom and my dog if I told anyone,” said the victim. “I took the pain, so no one else had to.”

The twelve-person jury deliberated for approximately one and a half hours before returning a unanimous guilty verdict.

“The Victim’s testimony was extremely powerful,” said Assistant District Attorney Greg Stahlnecker, who prosecuted the case along with Assistant District Attorney Jason Chatagnier. “We felt her testimony, along with the forensic evidence and explicit images of the victim found on the defendant’s phone proved our case beyond a reasonable doubt, and we are happy the jury agreed.”

Stahlnecker continued, “She is an incredibly strong young lady, and the only good that could come from this was given to her when the jury found her abuser guilty.”

The Honorable Christopher Boudreaux, who presided over the three-day trial, ordered that Morgan Ratley remain in law enforcement custody until his sentencing on October 19th at 1:30 p.m.