Child Support Roundup Targeted Those Who Made No Attempt To Pay 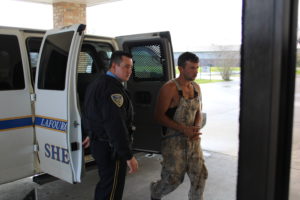 “This operation had less to do with the amount owed, and more to do with the lack of effort to make payments,” said District Attorney Kristine Russell. “The majority of the men and women in Lafourche Parish pay their child support; in 2019, we collected over $10 million in child support payments. It is not our desire to put these individuals in jail for non-payment, but we must hold them responsible. We make every attempt to work with them to collect payments before making an arrest. Until we start investing in our children and our families, we will never see a change in our communities.”

District Attorney Russell noted that the roundup was only one portion of their year-round effort to hold those behind on child support accountable.

On the 25 warrants, a total of 9 individuals were arrested as part of the operation. Officials say they expect additional arrests to be made in the coming days. The combined child support payments owed by those arrested were nearly $290,000. Two of the individuals on the list, Blain Breaux and Norbert Bouzigar III, were found with suspected methamphetamine and will now face additional charges. Wendy Welch, who was not on the list and found with Bouzigar, was also found with suspected methamphetamine and taken into custody.

The following individuals were the focus of the operation:

“The success this morning is just a small part of the larger operation efforts,” said Sheriff Craig Webre. “Proactive policing initiatives like this roundup have a much broader effect than just the people that get arrested during the operation. What we will see in the days to follow is that more and more people will be contacting the District Attorney’s Office or the Sheriff’s Office wanting to come in and pay.”

Webre continued, ”We are very serious about those who are not living up to their obligations and taking care of their children. We’re letting them know that we’re not going to forget about what they owe, and we’re going to be very vigilant and aggressive in pursuing them and holding them accountable.”

Anyone who owes child support payments is encouraged to contact the Lafourche Parish District Attorney’s Office at (985) 448-3422 as soon as possible. Anyone who knows the location of any person wanted for failure to pay child support can submit information anonymously via Crime Stoppers Bayou Region by calling 1-800-743-7433 or by submitting a tip online at www.crimestoppersbr.org.