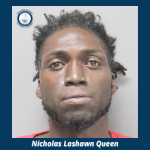 Lafourche Parish District Attorney Kristine Russell announced that a Thibodaux man charged with Manslaughter in August of 2019 was convicted as charged by a Lafourche Parish jury on Wednesday, June 22nd, 2022.

Nicholas Lashawn Queen, 38, and the deceased victim, Brianisha Ross, shared a relationship for several years at their home on Carol Street in Thibodaux. On the night the victim was killed, Queen arrived home from work and started an argument with the victim about their generator being out of gas.

During the argument, Queen began hitting the victim and eventually knocked her over onto a glass shard from a shattered coffee table that punctured her body and led to her death.

Fournet continued, “The defendant killed Brianisha. He made a choice to put his hands on her, and his choice has consequences.”

The jury deliberated for several hours before returning a unanimous guilty verdict.

Manslaughter carries a sentence of up to 40 years at hard labor with the Louisiana Department of Corrections.

“Domestic Violence often goes unreported, and it is because of this we have provisions in the law to allow others to testify about abuse they witnessed for those victims who cannot,” said Fournet. “Even though Brianisha isn’t alive today, her story was able to be heard.”