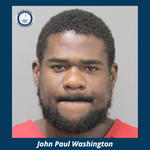 Lafourche Parish District Attorney Kristine Russell announced that a Thibodaux man charged with 2nd Degree Murder in May of 2019 was convicted as charged by a Lafourche Parish jury on Thursday, May 26th, 2022.

John Paul Washington, 30, was arrested by the Thibodaux Police Department after an investigation revealed he and an accomplice shot the victim, Travontae Williams, multiple times in the area of Midland Drive and Plantation Road leading to his death.

Evidence introduced during the three-day trial showed that Washington had made statements of his intentions to murder the victim because Washington felt disrespected by the victim.

The jury deliberated for around three and a half hours before returning a unanimous guilty verdict.

John Paul Washington now faces a mandatory life sentence without the possibility of probation, parole or suspension of sentence.

Chatagnier continued, “This conviction is the direct result of the hard work and dedication of the Detectives at the Thibodaux Police Department. Our hope now, is that the family of the victim can heal from this senseless tragedy.”

The Honorable John Leblanc, who presided over the trial, ordered that Washington be remanded into law enforcement custody without bail pending his June 15th sentencing date.

Washington’s accomplice is set for jury trial in July of 2022.